The Countless Beauties Of Trani 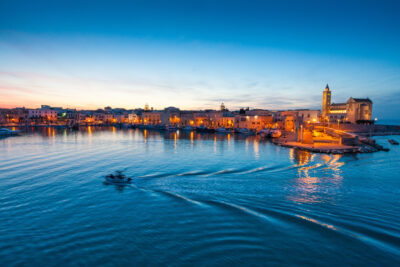 Trani is an Italian town of about 55,000 inhabitants. Together with Barletta and Andria, it is the capital of the Barletta-Andria-Trani province, overlooking on the Adriatic Sea.

During the Middle Ages, it was an important urban center and commercial port on the Adriatic. In the past, Trani was for more than two centuries the seat of the “Royal Audience” of the province of Terra di Bari. This resulted in it becoming the capital and main administrative and judicial center, and later the seat of the “Apulia Court of Appeal”.

The historic center of Trani has the backdrop of the majestic silhouettes of the Cathedral of San Nicola Pellegrino. This is a masterful example of Apulian Romanesque architecture. The Swabian Castle is an evocative melange of cobbled streets, and then it goes inside among craft shops, galleries, fish restaurants and fascinating views. Behind the romantic port begins the Jewish quarter of Giudecca. Here is where the Synagogue of Scolanova, the oldest Jewish temple in Europem stands. The elegant civil architectures, such as Palazzo Caccetta, with late Gothic friezes, and Palazzo Telesio have a Renaissance profile.

Lots to see and do in Trani for tourists in Italy

The economic production here is changeable. In addition to the extraction and processing of Trani stone from its quarries, there is the footwear, clothing, metalworking, and wood industry. The tertiary sector and tourism, both cultural and seaside, are excellent for tourists. Trani is among the famous art cities of Puglia. This is thanks to the historical and artistic importance of the ancient village and monuments such as the Romanesque cathedral and castle.

The cathedral of San Nicola Pellegrino, whose upper basilica is dedicated to Santa Maria Assunta, is the most prestigious building in the Apulian town.

It is one of the most representative and valuable examples of Apulian Romanesque architecture. It is defined as “the queen of Puglia’s cathedrals” and is also a popular destination for cultural tourism. The construction is of limestone typical of the area. The stone of Trani is from the quarries of the city, and it boasts a very light pink color is almost white.

The cathedral stands out from any other example of Apulian Romanesque architecture. First of all for its position of immediate proximity to the sea and also for being fully legible on the external fronts from all sides. It is also distinguished by the imposing transept crowned by an elaborate cornice. The use of the pointed arch in the passage located under the bell tower is a phenomenon not widespread in Romanesque architecture.

The construction of the current cathedral began in 1099. It was in the period immediately following the sanctification of San Nicola Pellegrino, during the Norman domination. 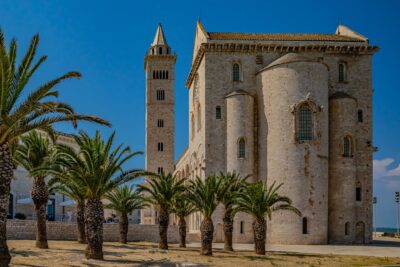 Another breath-taking monument to visit in Trani is the Castle, built on the model of the Crusader castles of the Holy Land. It has similarities to the Roman castra, with a quadrangular plan, reinforced at the top by four square towers of equal height.

Since the 16th century, with the advent of firearms, the castle is to the new defensive techniques. It was again the subject of adaptation works in the 19th century to adapt it to the prison function. Now it is home to the Ministry of Cultural Heritage and Activities, which oversees the restoration and museum creation.

The building has two monumental halls on the first floor from the Frederick era. This central nucleus was enlarged with the construction of bastions. The one to the north-east with a square plan and the one to the south-west with a spearhead. They are connected by the wall enclosing large secondary courtyards. The body of the casemates, built in the Renaissance period, delimits the central courtyard.

In the heart of the historic center of Trani, there is the Scolanova Synagogue. It is a wonderful example of Apulian Romanesque architecture. It represents the most important testimony of the ancient Jewish quarter of the city. In December 2017 the Municipality of Trani entrusted it for 4 years to the Jewish Community of Naples.

The Scolanova Synagogue dates from the 13th century and you can enter by means of a staircase that rises from the street to a door on the western side. The simple facade overlooks via Scolanova. The building has gorgeous limestone masonry. It has a single portal and four arched single-light windows, with a tympanum on which stands a wrought iron star of David. The architectural features recall the style of the religious buildings of the Murge and the Itria valley.

Among the civil buildings in Trani, Palazzo Caccetta and Palazzo Telesio stand out. Built in 1456 on commission of a trader from Trani, Simone Caccetta, the palace is an example of the newborn Renaissance architecture.

Required by the King, it houses the offices of the governorate first, then the University. Owned by the municipality, it hosted the Venetian governors until 1509. It later became a convent of the Teresiniani monks in 1642 and a seminary in the eighteenth century. It is currently one of the branches of the Palace of Justice.

Palazzo Telesio overlooks the white and bright Piazza Quercia, a few meters from the sea. The building has several levels including caves and the wonderful entrance hall. Palazzo Telesio underwent an expansion on the east side after the demolition of the Frederick walls.